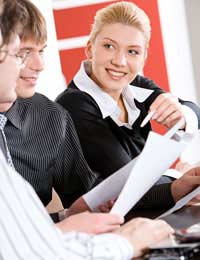 Speaking to an audience of 100, 500 or 1,000 people? Then distributing handouts to them all may seem like a good idea, but could turn into a logistical nightmare.

(The one exception to this rule is when your handouts are part of a convention brochure that every convention attendee will be receiving. In that case, you can simply say, "Turn to page 82 in your workbook for my handout.")

Handouts should be easy-to-follow and simple to read. If you're developing your handout on your own, don't try to be overly creative. Just keep the message and wording as straightforward as possible. A general rule of thumb is to avoid using more than one or two fonts… and watch how much "clip art" you insert, as it can be distracting and appear unprofessional.

Your Handout Shouldn't be an Outline of your Speech

Handouts are most useful when they accompany your speech, not deliver it for you. They are to be used as worksheets and/or reminders. So don't include everything you'll be saying word-for-word on them.

Handouts Should be the Same Size as one Another

This can be tough, especially if you need to print off spreadsheets or data, but it's still possible to make sure all your handouts are the same size. As an audience member, there's nothing more annoying than trying to figure out how to easily carry a brochure, postcard, legal-sized handout, and letter-sized reminder out of a presentation without dropping something.

If you find that you MUST use different-sized handouts, at least staple or bind them together or put them in pre-organised folders for the convenience of your listeners.

Your handouts aren't there to "sell" you. This means that if you give your audience 85 well-written handouts, they won't make up for a mediocre presentation. The onus on you is to be greater than anything you hand out to the crowd.

Think it's okay to make a copy of an article (that you didn't write or don't own the copyright to) just because it'll make a great supplement to your talk? Think again.

Though you may be able to get away with this kind of plagiarism once or twice, it's likely to catch up with you in very uncomfortable (and perhaps expensive) ways. Therefore, if you find an article, essay, or other item you'd like to reproduce, contact the author or publisher to obtain permission before hitting the "copy" button.

Don't Hand Out a Copy of an Entire PowerPoint Presentation

This is a huge pet peeve of many audience members (though to be fair, some presenters swear it's an excellent method of making sure that their listeners follow along.)

Although PowerPoint gives you the tantalising option of printing off your talk using a slide-by-slide method, ask yourself if it's really worth it. Or is it just a waste of time, energy and resources?

If You Don't Want to Use Handouts, Then Don't!

There is no hard and fast rules governing the use of handouts. If you can't think of anything to write, then it's probably best if you don't use them at all.

Learn From Your Mistakes

After your speeches, check around the room. Are your handouts consistently being left on the floor, on seats, or in rubbish cans? If so, those are strong indications that you can probably do without handouts in the future.

Even if you're the best writer in the world, chances are good that you'll have a typo or two in your handouts. And chances are also good that you won't notice it until right before it's time for you to address your crowd!

Always ask someone else to proofread any material that's going to be used during your speech. Otherwise, you could wind up blushing from embarrassment instead of from a standing ovation.

Speaking About a Topic You Don't Know Well