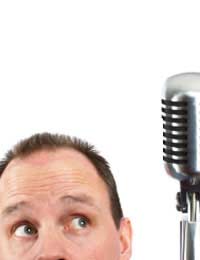 Many scientists believe that the human mind operates as a kind of tape recorder. We hear something it’s imprinted within our subconscious, and we wind up replaying it over and over. Sometimes, what we record comes from external sources; other times, messages are internally-driven.

For example, a mother might tell her 10-year-old daughter again and again, “Don’t put your elbows on the table when we’re eating! It’s bad manners!” At first, the young girl might forget and lean on the table, but eventually her mother’s voice will be “recorded” to the point that, when this female is in her 40s and seated in a restaurant, she’ll still hear her mother scolding: “Don’t put your elbows on the table…!” Accordingly, she’ll obey this “recording.”

Similarly, if a person thinks to him- or herself: “I can never stand in front of a crowd and speak!”, that message is going to eventually become part of his or her personal collection of “recordings”. Thus, when he or she is asked to give an address or speech, it will seem virtually impossible.

ENTER THE PRACTICE OF HYPNOSIS.

Very simply, hypnosis (named after Hypnos, the Greek god of sleep) is a way of “rewriting” and “recording over” messages that people replay (usually subconsciously.)

In the movies and on television, hypnosis has sometimes been portrayed as dark and sinister, but it is actually fairly cut-and-dry with few (if any) negative side effects.

Basically, a professional hypnotherapist (sometimes referred to as a “healer”) helps a patient enter an altered state so he or she can essentially “rewire” his or her brain through neurolinguistic programming (aka “NLP”). Hence, the person who overeats feels less and less compelled to do so; the chain smoker stops puffing on cigarettes; and the perpetually pessimistic executive begins to see the world in a more positive light.

Consequently, for the individual who strongly fears public speaking, hypnosis can be highly effective, but only if he or she wants the process to work.

That single fact is probably the biggest misconception about hypnosis; truly, hypnosis is only effective when the hypnotized man or woman agrees to undergo this type of therapy. If he or she is reticent or skeptical, hypnosis will not and cannot work.

Given this information, if you’ve tried many other ways to overcome your dread of speaking in public only to have your angst return, hypnosis may be an excellent option… but only if you want it to be. Really, for you to have a successful outcome, you need to give yourself over 100% to the hypnosis process.

While undergoing hypnosis, you will most likely feel incredibly relaxed, though some understandable trepidation during your first session may be present. You’ll also be in total control of what you’re doing at all times. It’s a commonly-held rumour that a hypnotherapist can undermine the “free will” of a patient. In laymen’s terms, this is pure rubbish. Being hypnotized will not render you unable to exercise your desires, including ending the session if you cannot feel comfortable or do not trust the hypnotherapist.

However, it is crucially important that if you are considering hypnosis as a means of overcoming “stage fright” that you open yourself to seeing public speaking in a new light. Don’t allow yourself to hang onto your old, unconstructive “recordings”; if you do, the new, hypnosis-induced “recordings” will be unable to take hold.

HOW CAN I LEARN MORE… INCLUDING FINDING A HYPNOTIST?

Finding a hypnotherapist, unfortunately, is not a simple process. Certainly, you surf the Internet and find many individuals who claim to be “licensed” or “reputable” hypnotherapists, but it will behoove you to do a tremendous amount of homework before spending your money.

Because there is no single governing body for hypnotherapists (as of mid-2007), anyone can hang out a shingle and represent him- or herself as someone who can use hypnosis to rewrite someone’s neural programming. Your family doctor or a psychotherapist may be a good referral source or starting point. Some men and women have also found success performing self-hypnosis with the assistance of books, DVDs, and/or CDs.

SOME FINAL THOUGHTS ON HYPNOSIS

Just remember that although hypnosis may be a perfect match for your concerns, you won’t walk out of your first session ready to deliver a speech without any anxiety. Hypnosis, while effective for numerous people, takes time.

So if you have a speech scheduled for a Wednesday, don’t start looking for a hypnotist on Monday. But do keep an open mind about this technique for the future, as countless persons have been freed from their fears using this virtually painless, chemical-free technique. Who knows? You just might be the next individual to unburden yourself and be able to confidently stand before a crowd thanks to hypnosis’ help.

Why Some Are Anxious About Public Speaking?

Handling a Case of Nerves

Dealing With Problems With Poise