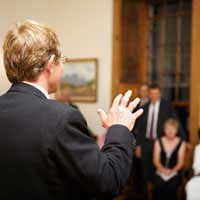 Congratulations! You’ve been asked to make a speech for a birthday or anniversary celebration.

Though your task ahead may seem a bit overwhelming at first glance take heart. This type of public speaking is one of the most forgiving in terms of audience expectations, as listeners are often so focused on the reactions of the recipient(s) of the speech that they only remember about half of what is said by the public speaker.

That being noted, it’s still important that the speech you deliver is appropriate in subject, tone, and length. After all, a true speech isn’t a simple one-sentence toast; it’s much more involved, with a beginning, middle, and end.

To help you prepare for your next birthday or anniversary speech, each topic area mentioned above has been addressed in greater depth.

In terms of subject, a birthday or anniversary speech will obviously be focused upon the addressee(s). However, what you choose to say about that person (or those persons) is entirely up to you.

Some common themes can include:

Something a person has accomplished…
“In a mere thirty years, Joseph has been able to achieve more than most individuals do in a lifetime. Not only is he the president of a thriving company, he’s also a dedicated father of four beautiful children, a devoted husband to Miranda, his school sweetheart, and the published author of several self-help books.”

A humorous or touching anecdote about the recipient…
“Madeleine has often told me that when she and George met, she knew right away that he was the clumsiest, silliest, most ridiculous man she’d ever encountered… so thirty-five years ago, she married him!”

Or a wish for the future of the addressee…
“Grace, we’re all here to celebrate your eighteenth birthday. On such a special occasion, I believe I speak for everyone when I encourage you to reach for your dreams no matter how substantial they may seem right now or how many people tell you they can never be realised.”

Your relationship to the recipient(s) mixed with the overall mood of the occasion will determine the tone your speech should take. For example, if you’re discussing your brother or sister, your talk should be personal, showing listeners the intimate relationship you share with the person(s).

On the other hand, if you don’t know your addressee(s) well (as in the case of co-workers, neighbours, coaches, et cetera), you’re better off playing it safe and simply sticking to an affable, supportive tone.

An example of each type of tone is given below:

(Very familiar with the recipient)
“My mother has given so much to me. She’s taught me how to be a good friend, a great listener, and an awesome tennis player! (pause for chuckles) But most of all, she’s shown me how courageous and optimistic one person can be when faced with a disease such as leukaemia.”

(Not very familiar with the recipient)
“As an educator, Ted Smith will be remembered as someone who gave of himself to his students, their parents, and the community. And on this twenty-fifth anniversary of his employment with this institution, we gather here to thank him for being such a pivotal part of this school’s rich history.”

A birthday or anniversary speech need not be particularly lengthy, but don’t make it so short that everyone wonders why you bothered to talk at all.

In general, the duration of such a speech is a minute or two unless you’re the only speaker and the birthday or anniversary is a particularly momentous occasion (e.g., a fiftieth “golden” wedding anniversary, the forty-second birthday of someone who has been battling cancer for the past year, the twentieth anniversary of an organisation’s founding.) In the case of the latter, a longer speech is appropriate, but try to keep it under 5-8 minutes for maximum impact.

To help you realistically gauge how long your speech will be when said with a natural cadence, time yourself using a clock or (better yet) stopwatch. Remind yourself to add pauses of a few seconds if you expect any audience response (such as laughter or cheers.)

Remember that birthdays and anniversaries are happy events. Consequently, your speech should leave everyone with a “warm” feeling. Topics to steer clear of include negative experiences (unless they were heroically overcome), bad relationships (as in mentioning someone’s recent divorce or “falling out” with family members), or nasty commentaries (usually under the guise of “humour”.)

No matter what, if you’re having fun and being honest, it’s likely that your recipients and the events’ guests will be, too.